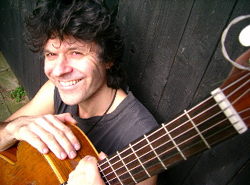 Musical troubadour poet who makes friends wherever he goes

Rory is always on the move – though even he’s not sure whether he’s running away or going somewhere. Either way, he is a fascinating man – a former clown and fire-eater who ended up playing solo because the band he was in didn’t want to sing songs about his grandma who loved to dance. Rory is an enormously appealing character, embracing many styles, travelling widely, and writing intelligent songs.